Sometimes, when you try installing software in Ubuntu through Ubuntu Software, you end up with an unwanted 'Waiting to install' entry in the Unity Launcher. The reason it's unwanted is mostly because nothing is happening actually, just that when you hover the mouse over it, you see the 'Waiting to install' message.

For example, the other day I was installing FileZilla on my Ubuntu 16.04 box, and I ended up with a similar entry in my launcher: 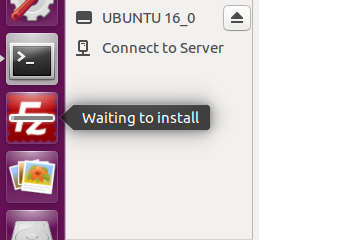 In my case, the issue occurred when I double clicked the 'Install' button in Ubuntu Software window. But there could be other reasons, depending on what you're trying to do. The point is how you can rid of this unwanted entry?

In this tutorial, we will discuss the solution to this problem. Please note that all commands/instructions mentioned in this tutorial have been tested on Ubuntu 16.04LTS.

Get rid of unwanted 'waiting to install' entry in Unity launcher

The solution to the problem is very easy - all you have to do is to run the following command:

This aforementioned command will reset the default Launcher icons. In my case, the unwanted FileZilla icon went away after I executed this command.

But just in case the above command doesn't work for you, you can try resetting Unity itself, something which you can do using the following command:

Alternatively, you can restart Unity using the following command:

I am sure, one of three ways mentioned in this tutorial will definitely work for you.